This post is sponsored by Oregon’s Mt. Hood Territory but the content and opinions expressed here are my own. 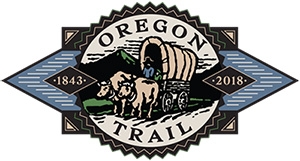 Living in our part of Missouri we have a lot of history. Near where we live is a city called Independence which took a part in westward expansion. Every year there is a fun celebration called Santa-Cali-Gon which is in honor of the Santa Fe, California and Oregon trails. These trails crossed each other in Independence, Missouri. This year is the 175th anniversary of the Oregon Trail and so again, Independence threw an awesome celebration. 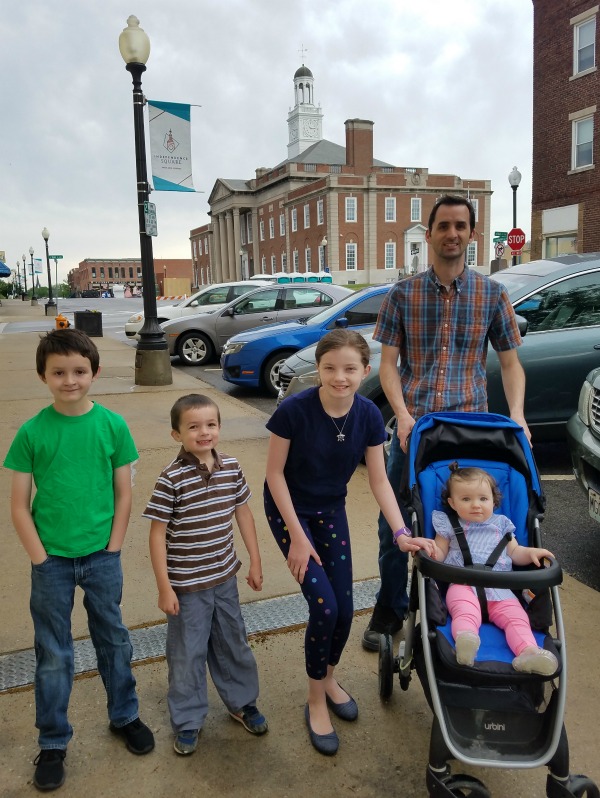 We were really excited to take part in the 175th anniversary celebration that mostly took place around Independence Square in Independence, Missouri. There were a lot of different fun and games provided as part of the celebration. There was a Ho-Down, fashion show, wagon ride and more! They really did well with the authentic celebration.

First up we traveled through a mock Oregon Trail where you can to conquer maladies and trials. The different station included crafts, puzzles and physical challenges. It was a lot of fun. My advise, don’t put your chances of hunting food in the hands of an 8 year old! 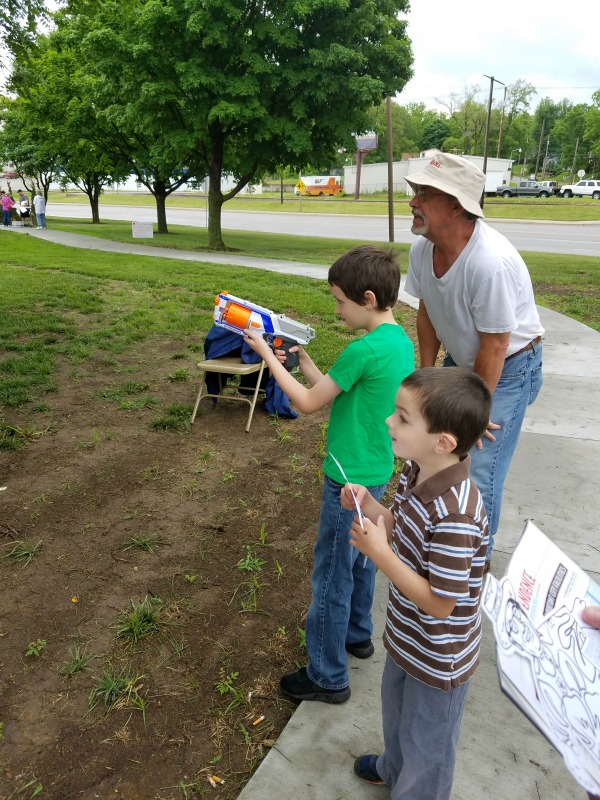 The Pioneer games was a lot of fun. Life without electronics was still really enjoyable. The kids had a blast playing with the toys, and making pioneer games. My sons made a picture moving toy and my daughter made a corn husk doll. Simple little toys, but they loved them. 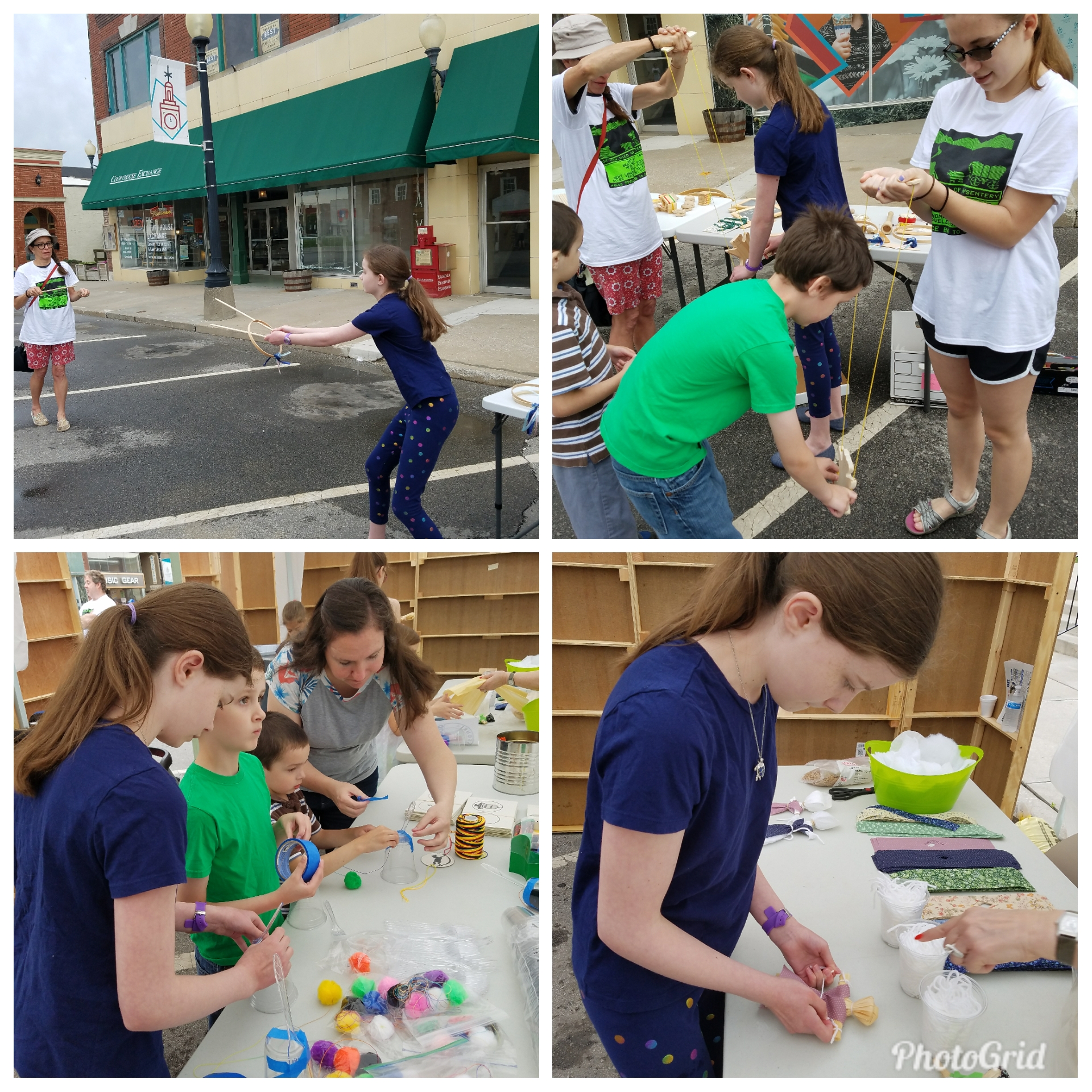 Nearby Independence Square is the National Frontier Trails Museum. This fun museum has information and artifacts from the trails that came through Missouri. It was a lot of fun to learn more about the Pioneers on the Oregon Trail and as well as other pioneers traveling westward on other trails. This museum has a lot of hands-on fun for children and really made pioneer life relatable with a room where you can load your wagon and try not to over fill it. 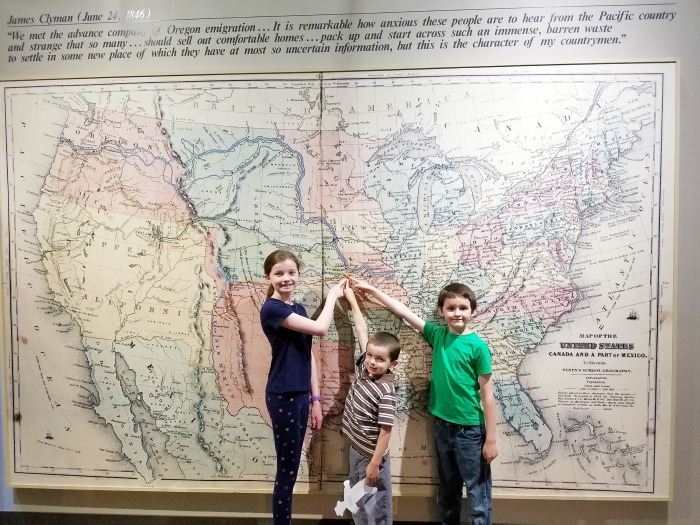 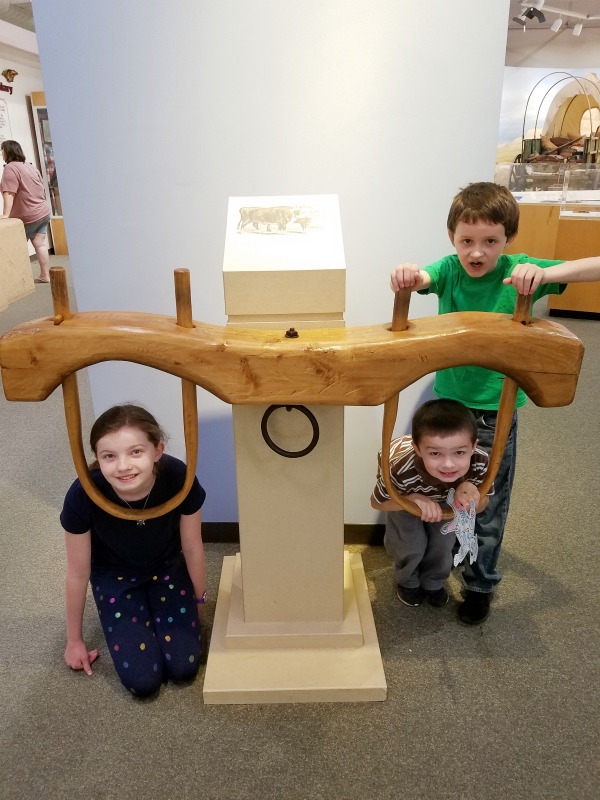 Our favorite part of the day was the wagon ride through the streets of Independence hearing stories of the settlers, the civil war and westward expansion. This wagon ride wasn’t just happening for the Oregon Trail celebration, it happens every weekend and is something I would like to go back and do again. There are different tours with different information so I’d be very interested in the other tours. 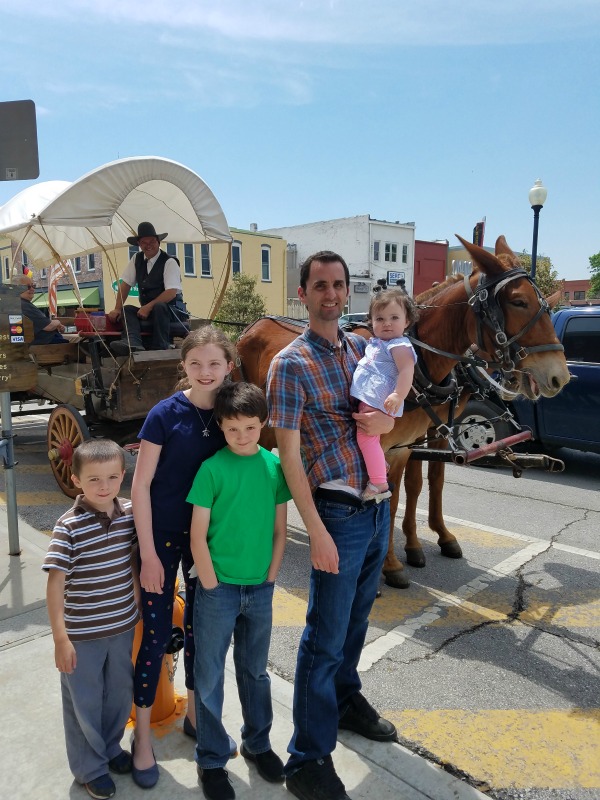 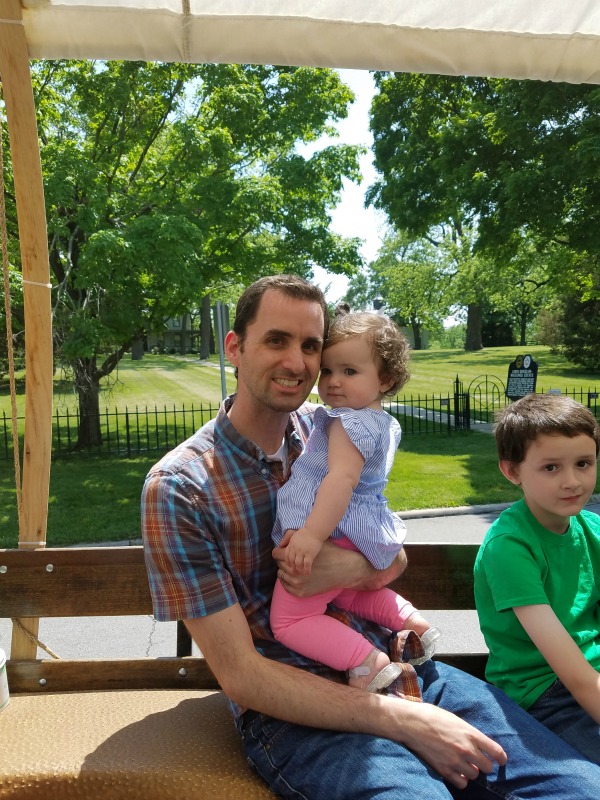 One of the most interesting spots we visited as part of the Oregon Trail 175th anniversary was the 1859 Jail and Marshal’s Home in Independence Square. Frank James, brother of the infamous Jesse James, was jailed here, though the door was never locked on him. The jail was built from native limestone and was really interesting to walk through, though only the bottom part of the jail is open. The upstairs of the jail is only accessible from a ladder so the public can’t climb up, but they removed a wall in the Marshal’s home to show the top floor of the jail. 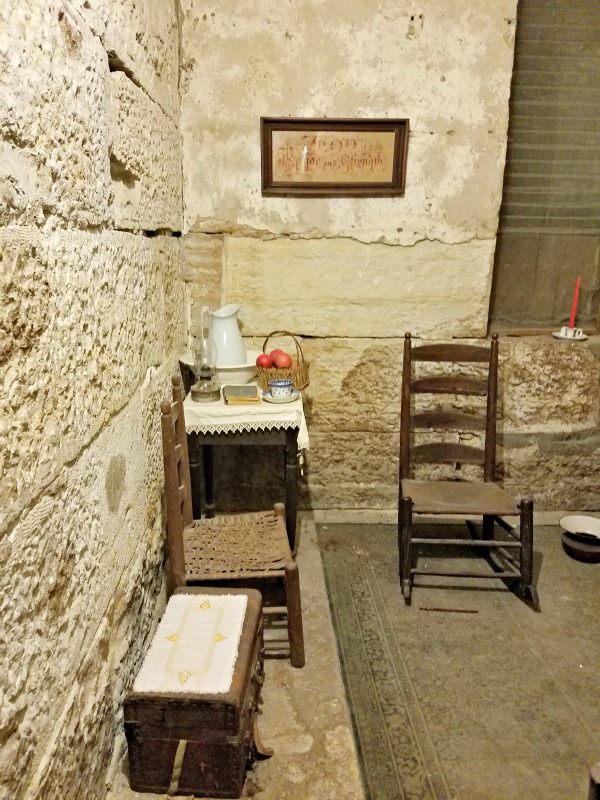 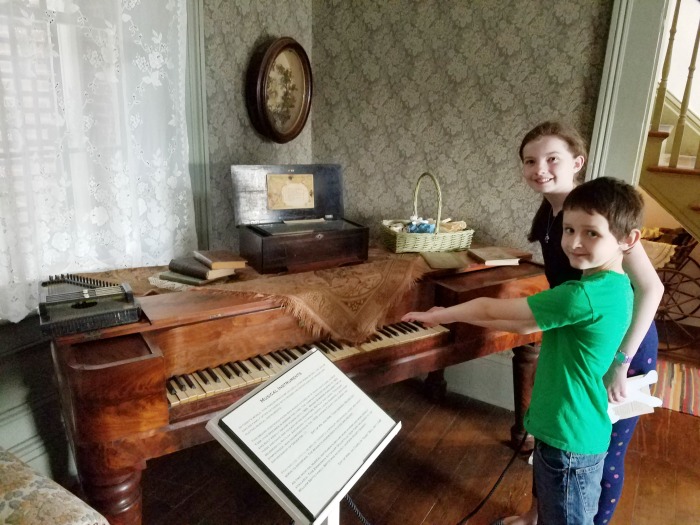 Back behind the jail and Marshal’s home is a little school house. My kids enjoyed peeking in to see what the desks looked like. They noticed the children wrote with chalk on slates and used rags for erasers. I thought it was funny that in the corner was a stool with a dunce cone on top. 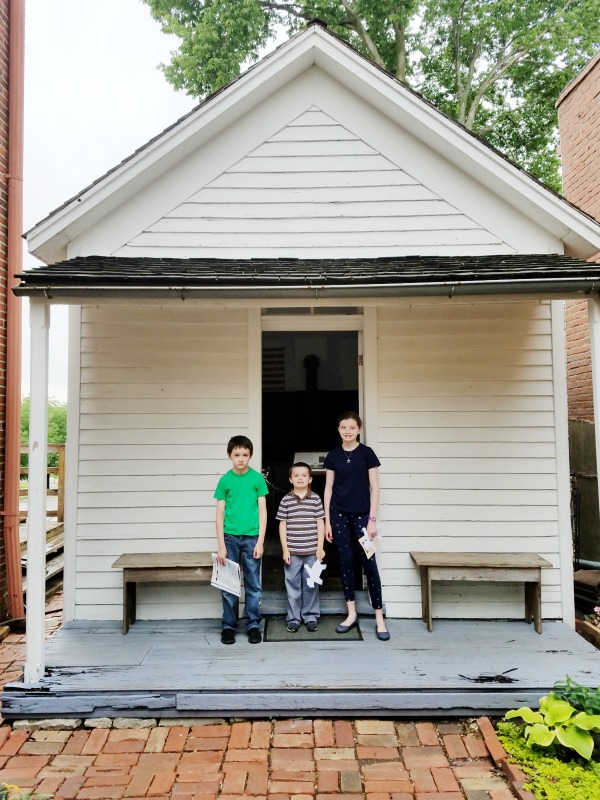 At the end of the day we attended a pioneer fashion show. It was really interesting and fun to see the clothes that the pioneers would have worn. Whether they were wealthy, poor, slaves, workers or other stations in life, they clothing was represented. It was really fun. 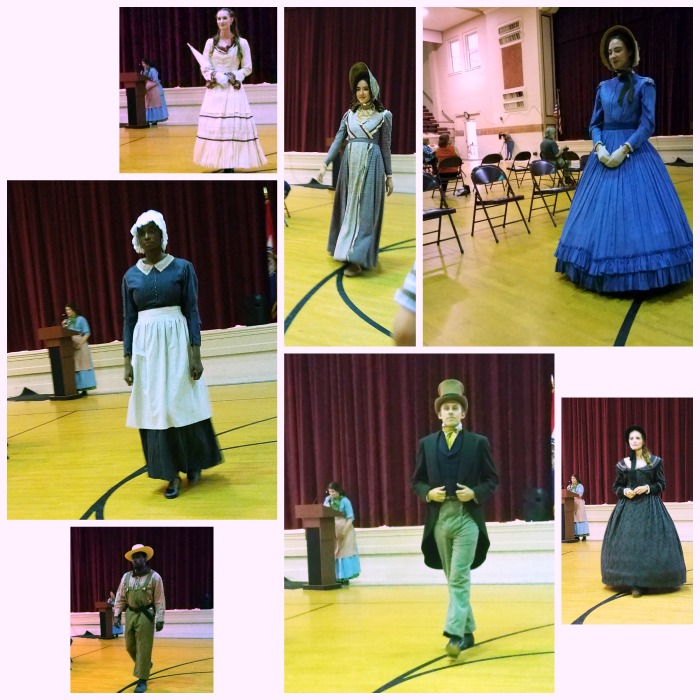 I’m so grateful the hard work, persistence, trials conquered and courage of the pioneers crossing the plains. I’m grateful for their trek so that we could progress to where we are today. To learn more about the Oregon Trail as well as the other celebrations along the trail past Missouri check out this website.

Independence Missouri was the beginning of the Oregon Trail celebrations. Check out more bloggers articles along the path and at the end of the trail.

Exploring the Oregon Trail in Nebraska

175 Years of the Oregon Trail

175th Commemoration of the Oregon Trail

End of the Oregon Trail

From Oregon Trail to Modern Pioneer

Comprehensive Guide to the end of the Oregon Trail

175th Anniversary of the Oregon Trail at Mt. Hood