You are here: Home / Archives for Oregon Trail 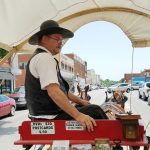 This post is sponsored by Oregon’s Mt. Hood Territory but the content and opinions expressed here are my own. Living in our part of Missouri we have a lot of history. Near where we live is a city called Independence which took a part in westward expansion. Every year there is a fun celebration called Santa-Cali-Gon which is in honor of the Santa Fe, California and Oregon trails. These trails crossed each other in Independence, Missouri. This year is the 175th anniversary of the Oregon Trail … END_OF_DOCUMENT_TOKEN_TO_BE_REPLACED