You are here: Home / In The News / Transformers Prime Beast Hunters – Predacons Rising

Disclaimer: I received a free product sample for review purposes. All experiences and opinions are my own. Yours may differ. 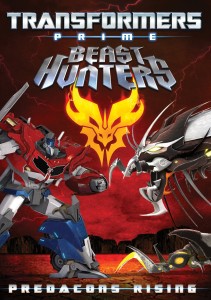 This movie is the epilogue to the final season of the cartoon series Transformers Prime. The series chronicles the epic battle between the Decpticons (Bad guys) and the Autobots (Good guys). Here is the official synopsis of the movie:

A resurrected Unicron has taken over the now life-lifeless body of Megatron to seek vengeance of the Autobots and ultimately, the destruction of Cybertron. This formidable enemy forces an unlikely alliance between the Autobots, Decepticons, Predaking and two new Predacons, who come together in an epic battle to help protect their newly restored planet.

If you have a glazed over look after reading that here is a little explanation to let you know what’s going on. I put together this explanation with the help of my 4 four year old.

Autobots, Decepticons, Predaking, Predacons – robots that can transform into every day vehicles, machinery, or animals

Autobots – the good guy (they transform into cars, trucks and motorcycles)

Decpticons – the bad guys (they transform into cars, trucks and planes)

Optimus Prime – the leader of the Autobots

Cybertron – the home planet of the Autobots, Decepticons and Preicons

Unicron – super duper bad guy (Unicron take over Megatron’s body to try and destroy Cybertron and anyone who gets in his way. Even though the Autobot, Decepticons and Predicons are all enemys, they all call Cybertron home and that’s why they join forces to defeat Unicron)

This is a good guys verses bad guys movie, where good triumphs and that everyone despite past differences can work together for a greater good. We really enjoyed watching this movie here at our house; if you and your kids are familiar with the Transformers Prime series (or even if you’re not) you will too.

Transformers Prime Predacons Rising is out on Blu Ray and DVD today!