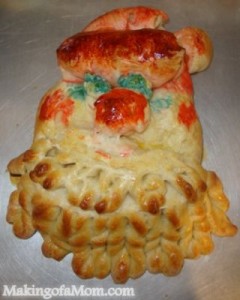 Today’s recipe was visually an epic fail! But my girls LOVED it and it was yummy, so it was totally worth it! I know what changes I’ll need to make the next time we make it- and there WILL be a next time! It was so fun!

Gypsys Melting Pot gives a recipe for the dough that I’m sure is delicious, but I’m a lazy chef, so I just bought Pillsbury Simply Rustic French Bread Dough instead. (I used 2 of the Pillsbury containers)

“Divide into two portions, one slightly larger than the other.

Shape the larger portion into an elongated triangle with rounded corners for Santa’s head and hat.

Divide the smaller portion in half. Shape and flatten one half into a beard. Using scissors or a pizza cutter, cut into strips to within 1 in. of top. Position on Santa’s face; twist and curl strips if desired.

Use the remaining dough for the mustache, nose, hat pom-pom and brim. Shape a portion of dough into a mustache; flatten and cut the ends into small strips with scissors. Place above beard. Place a small ball above mustache for nose. Fold tip of hat over and add another ball for pom-pom. Roll out a narrow piece of dough to create a hat brim; position under hat. 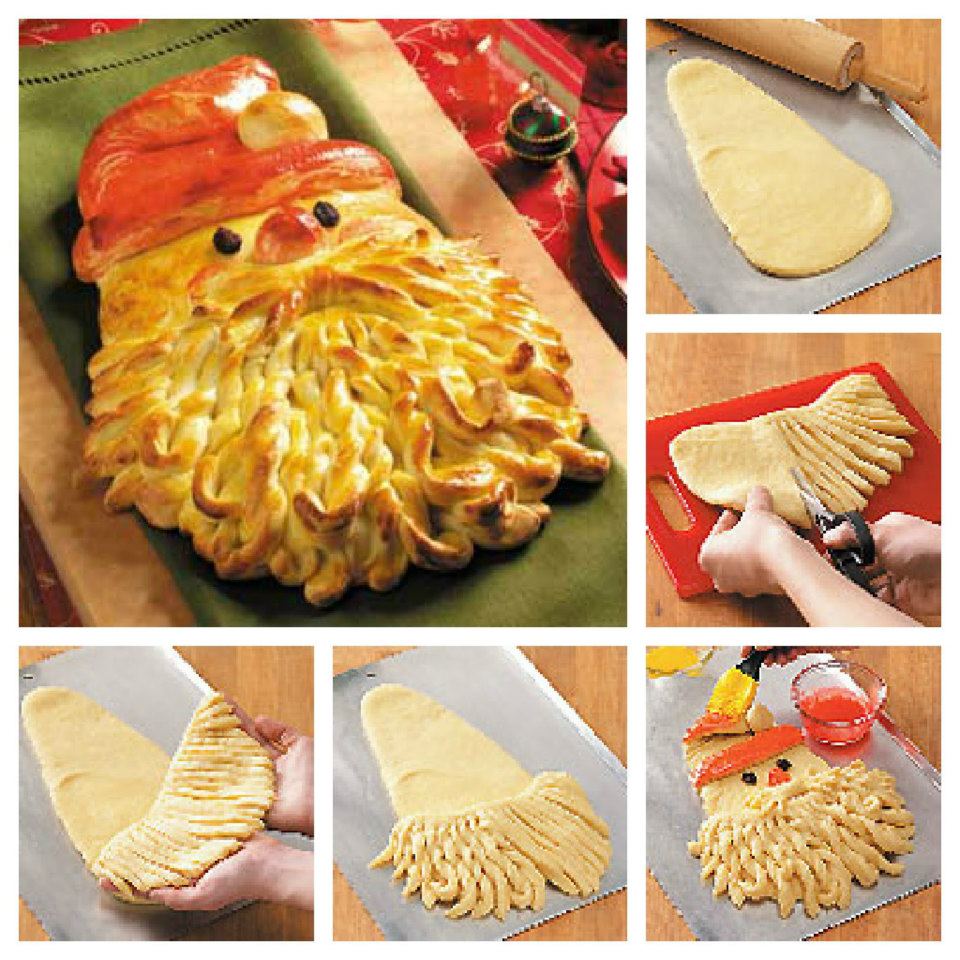 Shaping Santa Step-by-Step:
Step 1
On a lightly floured surface, shape the larger portion of bread dough into an elongated triangle with rounded corners for Santa’s head and hat.

Step 2
Shape and flatten half of the smaller portion of dough into a beard. Using a scissors or pizza cutter, cut the beard into strips to within 1 in. of the top of the beard.

Step 3
Carefully pick up the cut beard piece with both hands and position the beard on the bottom of Santa’s face.

Step 4
If desired, twist the cut strips in the beard and slightly curl up the ends of the strips to shape the beard.

Step 5
Add red food coloring to one beaten egg yolk and carefully brush the tinted red yolk over the hat, nose and cheeks.”