Okay, so I know I said on Tuesday that I would give 2 recipes today, but instead I’m doing 1 now and 1 more next Tuesday!

I’ve NEVER been able to make hash browns stick together! So I knew I this was going to be a challenge, but it looked so yummy I had to try! This is what it’s supposed to look like: 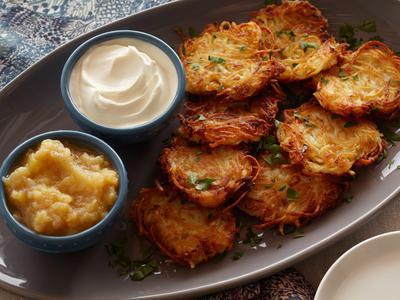 But mine turned into a pile of super delicious shredded potatoes! (And I DO mean super Delicious! My 4 year old said, “Oh this dinner is SOOO yummy! Thanks for making such a yummy dinner Mom!”)

Lots of Latkes (Click here to see the recipe on their website) naturally gluten free!! Woot! Once again, I’m super lazy, so I just bought Simply Potatoes Shredded Hash browns. You can find them in the refrigerated section by the doughs.

I also substituted the Matzo Meal with Yellow Corn Meal because we don’t have a Jewish food section in our store in the Midwest… Here is their recipe:

Fill a large skillet with 1/2 inch oil. Heat over medium-high heat until the oil is very hot but not smoking. To test if the oil is hot enough, drop a small piece of potato into the oil; if the potato sizzles steadily, the oil is ready.

Working in batches, scoop the potato mixture by 1/4-cupfuls and add them carefully to the skillet, flattening each latke slightly with a spatula. Fry, turning the latkes once, until golden brown and cooked through, about 3 minutes. Drain on paper towels. Remove any loose bits of potato mixture between batches with a slotted spoon.

Serve the latkes immediately, or keep them warm in a 200 degree F oven. Garnish with fresh herbs and serve with sour cream and Spiced Apple-Pear Sauce.

Cook’s Note: If you need to fry a lot of latkes, it’s best to make multiple batches rather than one double batch. The longer the mixture sits, the wetter it becomes which makes the latkes fall apart more easily as they cook.

Directions:
Combine the apples, pears, lemon juice, cinnamon sticks, nutmeg, 1 tablespoon sugar and 1/4 cup water in a medium saucepan. Bring to a boil over medium-high heat. Cover, reduce the heat to medium-low and cook until the apples and pears are very soft but still a bit chunky, 15 to 20 minutes. Taste the mixture and add the remaining tablespoon of sugar if desired.

Notes
Cook’s Note: This recipe can be prepared several days in advance and refrigerated in an airtight container. Let it stand at room temperature for a few hours before serving.”