You are here: Home / Family / A Caterpillar Named Parsley 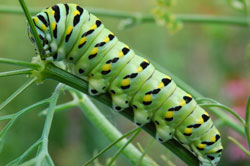 While gardening at Grandma’s house, the girl’s found a bright green caterpillar on her parsley. As all good Grandmas do, my mom happens to have a bug cage. We put the caterpillar and some parsley into the cage; all the while making him sea sick and talking entirely too loudly in his little face. After a few days of eating parsley like a crazy maniac, my oldest daughter decided that his name should be Parsley. (For Biddle’s Sake anyone?) 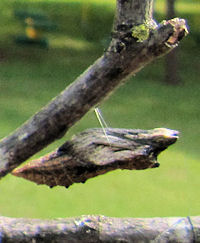 When he stopped eating and started wandering around the cage like a homeless man, we decided he needed a stick on which to form his chrysalis. So, we tore a little stick off Grandpa’s pear tree (don’t tell him!) and stuck it in with Parsley. Sure enough, within minutes, he attached his butt to the stick and got to work! (I think the correct term is something about a “silk girdle”?)

We finally decided we’d like to know what kind of critter he is going to be when he emerges, so we started searching the internet. Here is what we found out: