You are here: Home / Travel / 7 Reasons Besides Tourism that People Visit San Diego 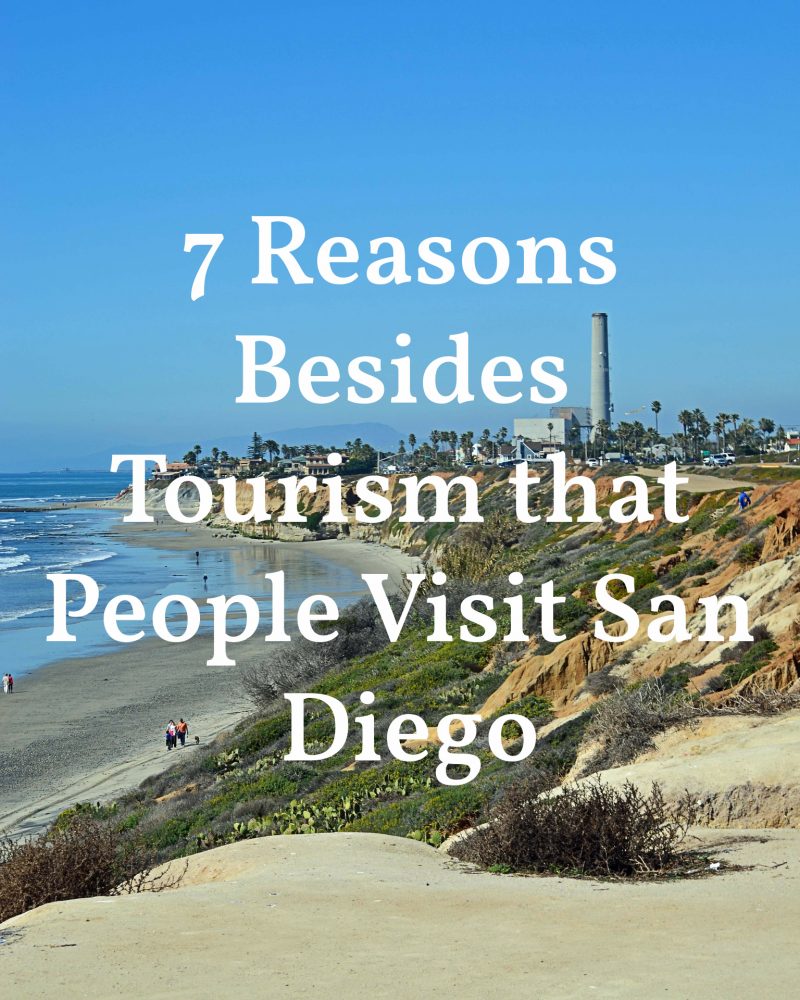 San Diego, California, delights many tourists with its spectacular botanical gardens, the beauty of its shores and the waters of the Pacific Ocean, and its ideal weather for boating and sightseeing. There are also museums and historical sites to visit. Nevertheless, numerous reasons besides tourism bring people to this area in the southern part of the state.

San Diego has moderate weather all year round. The climate is slightly dry as there are 263 days each year that are sunny or partly cloudy. In the winter months, temperatures range between the high 40s and the low 50s, so the climate is attractive to people who live in colder areas. In the summer, people will often seek the balmy beaches and sites of San Diego if they live in hotter regions.

With its many sunny days and its location, San Diego is a perfect venue for boat racing (and boating in general). The San Diego Bayfair began in 1964, It is a race that takes place in Mission Bay Park. There is a 2.5-mile racecourse, the fastest and longest course on the H1 Unlimited hydroplane circuit. Nowadays, there are various races that more than five million people enjoy. There are boat-racing tours that include Formula One tunnel boats, Pacific Offshore Powerboat Racing Association, the Grand Prix West, and several semi-professional classes.

With a coastline of 70 miles, San Diego is referred to as California’s Beach City. Along this coastline, magnificent cliffs offer spectacular views. The beaches provide many opportunities for activities on the water. One prevalent activity is surfing. Because San Diego has world-class waves, it has attracted world-class surfers. One of these, Australian-born Rob Machado, grew up in the San Diego area. He never strays too long from this area’s spectacular waves.

Among the numerous beaches, there are ones designated for dogs, adults, and families, and other groups. Bonita Cove is a beach that is popular with mothers of small children as it offers playground equipment and facilities that provide recreation. Another favorite beach for young families is Del Mar Beach. Moonlight Beach is also popular with families as there are volleyball nets and picnic tables available to everyone. Another beach suitable for families is Swami’s Beach, located in a popular area for surfing. This beach provides picnic tables and barbecues. Then, too, there is an area that is appropriately named Dog Beach. There, dogs can run freely, catch frisbees, and frolic in canine delight.

Nicknamed “Garbage Beach,” this location is a favorite of surfers and experienced swimmers. In contrast, young or new surfers enjoy Harbor Beach. Dad can fish off the pier, too. Imperial Beach has competitions for the surfers and is known for hosting the U.S. Open Sandcastle Competitions.

Birds and Other Animals at the Beaches

There are naturally numerous varieties of seagulls, pelicans, and other ocean birds in San Diego’s part of the Pacific Ocean. Various turtles, sea lions, and seals can be observed in their natural habitats.

Vasco Núñez de Balboa (Castilian/Spanish) was the first European to lead an expedition that reached the Pacific Ocean. He discovered in 1513 the Isthmus of Panama that allowed him to cross from the Atlantic. Today, the Spanish territory discovered by Balboa has a rich cultural history. Frequently alluded to as the “Smithsonian of the West,” Balboa Park in San Diego has 17 fascinating museums and numerous performing arts locations, along with botanical gardens and Spanish architectural landmarks.

Having so many picturesque and entertaining sites, San Diego is a pleasant and people-friendly area. With its almost perfect temperatures and many sunny days, San Diego supports excellent drug and alcohol rehabilitation centers for people with addiction problems. By placing people in a climate that will lift their spirits with its many bright days and mild temperatures, San Diego’s many rehabilitation centers enable people to get well more easily. Caring professionals conduct programs at the facilities and patients can enroll in short-term or longer-term programs, depending upon their needs.

One renowned center is the Northbound Treatment Center. There, patients are provided treatments focusing on lifelong recovery from drugs or alcohol. There is also the Sharp Memorial Hospital with the most accredited rehabilitation program of its kind in San Diego. In all, there are more than 30 centers for rehab in San Diego that are highly rated.