You are here: Home / Disney / Sitting at the Feet of Steven Spielberg and Ruby Barnhill 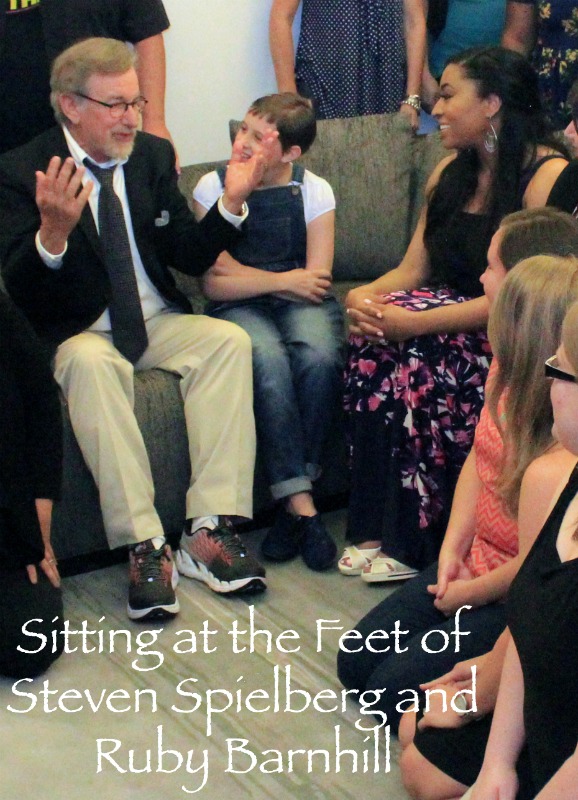 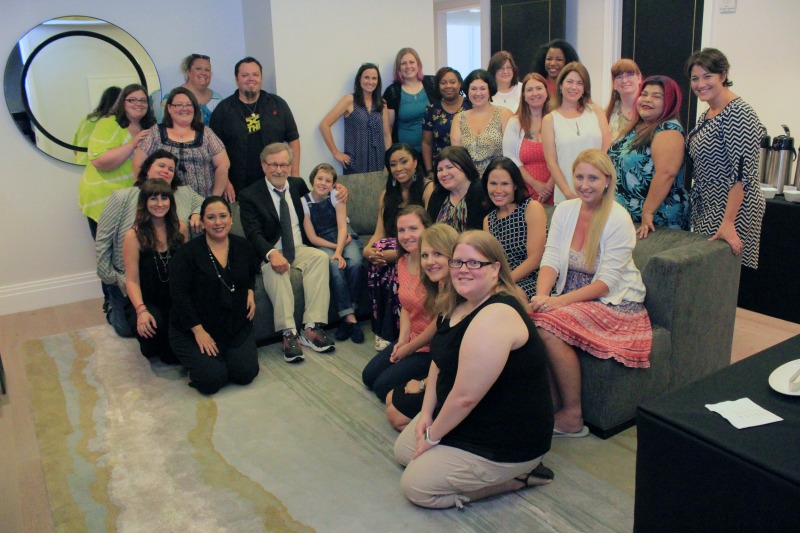 It’s always very exciting when the opportunity arises to interview Hollywood legends. I knew it was a HUGE deal to be interviewing Steven Spielberg, the most famous director in Hollywood. He directed the movies of my childhood like ET and the Indiana Jones series (which is one of my favorite movies!). I was really excited and pretty nervous about seeing him in person. 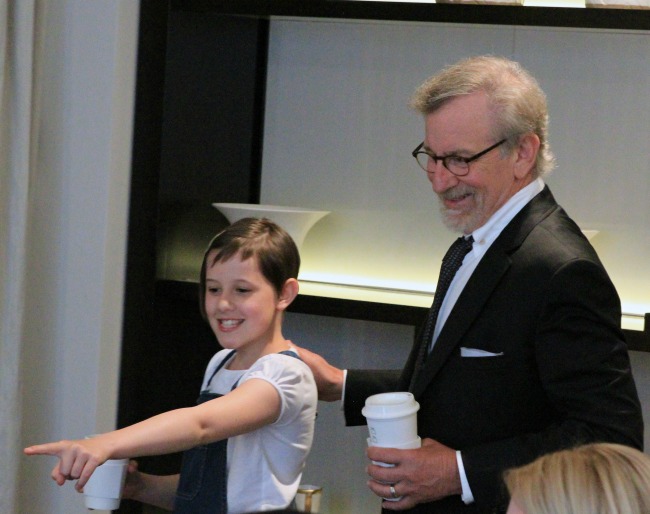 When Steven Spielberg and Ruby Barnhill walked into the room it was clear that they really cared for each other. Steven seemed to be very fatherly toward her. Ruby, who plays “Sophie” in “The BFG” is new to Hollywood as this is her first film. Steven was very considerate of Ruby and wanted her to have a shining moments in the interview. It would have been easy to just talk completely to Steven Spielberg, who doesn’t have a ton of questions for him? But he wanted Ruby included. It was very sweet. 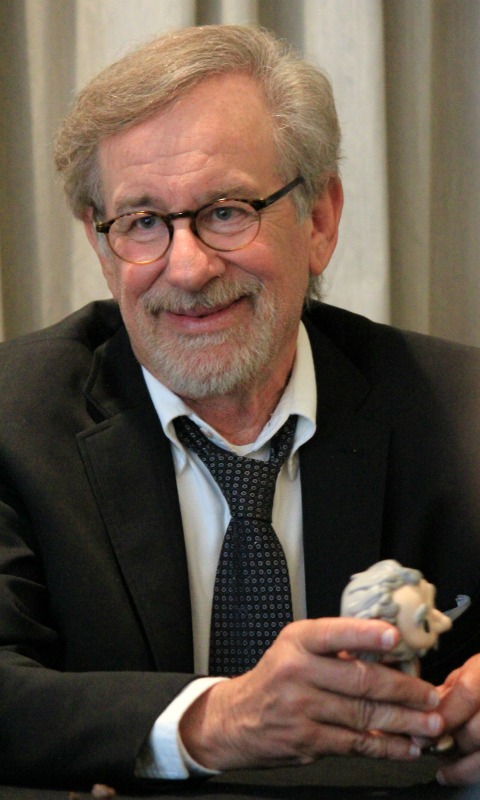 Let me just start by saying that Steven Spielberg is a beautiful human “bean” (see the movie if you don’t get that reference!) He was so humble, sincere, considerate, gracious, and a million other adjectives, but I’ll get to all that in a moment.

In talking about the process of finding actors for the film, Steven said that he had a hard time finding “Sophie.” It took him 8 months to find her. He was about to “compromise” and consider his second, third or fourth choice when he got the tape with Ruby’s interview. He was so excited that he had found her he said “[his] whole life changed for the better.” He was working on “Bridge of Spies” at the time and said he was so excited about finding her he didn’t care about “Bridge of Spies” in that moment. Ruby said that she had wanted to be an actress since she was little (which is so cute considering she is only 11) and so she was ecstatic. She thought at first they were playing a joke on her, but it was real and she was happy. 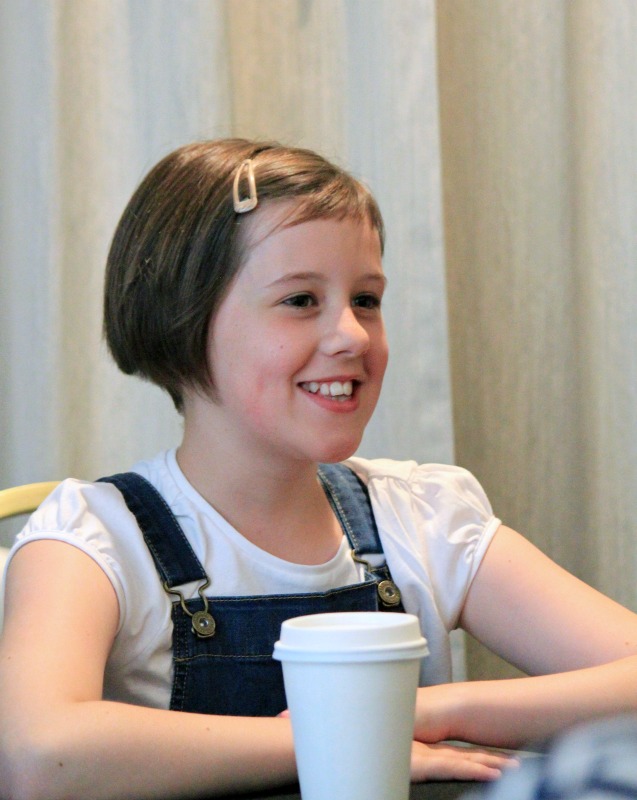 A fun fact Steven told us after Ruby shared how she got the part was that she put Ruby’s Dad in the film as well. He is a worker inside the Queen’s palace. It was so fun to learn that. We had seen the movie the night before so we knew exactly who Steven was talking about when he told us who her Dad was. That was probably very exciting for her whole family.

Ruby spoke about an important lesson she learned from Steven Spielberg. She said that she doesn’t like to make mistakes. She said that she would panic and get worried when she made a mistake but Steven taught her that it’s ok. When she’s onset if she makes a mistake no one minds, even if they have to do 100 takes. Steven then chimed in to say he doesn’t called them mistakes but “happy accidents” because sometimes they end up in the film. 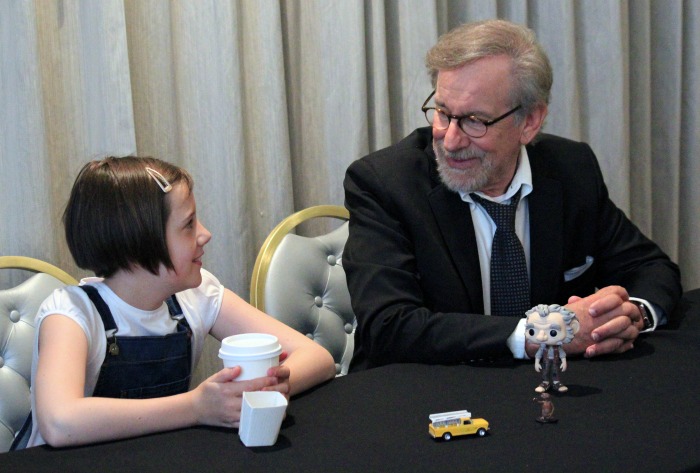 Someone asked him how he feels now reaching another generation? We all grew up with “ET” and now “The BFG” is being compared to “ET” as that kind of mystical, magical film for this upcoming generation. His answer was so sweet.

I think of it in a way as having a very large extended family. And I didn’t even understand when I was first starting out making movies about the power that film has. I wasn’t really appreciative or even aware of the outreach of cinema until I was actually older. And it took even — I thought Jaws was just a freak of nature, that would never happen again. And then when ET suddenly happened and lightning suddenly struck twice, I realized that cinema, you know, outlives the, the filmmakers. And outlives everything and becomes a part of the extended family of people from all walks of life who speak different languages and believe in different things, ’cause sometimes movies come along that make you see the same thing with the same feeling and it doesn’t matter what, what languages we share or who we are and what our backgrounds are, sometimes a feeling can be communicated all over the world without any signage and that power that film has is something that I really intimidates me and I respect it a lot, but it also scares me, because it’s pretty awesome when that happens.

“TheBFG” is Steven Spielberg’s first film under the Disney name. He said that “Walt Disney had a profound effect on [his] childhood” so to have his movie follow after the Walt Disney castle is something he has been waiting for all his life. W.O.W. 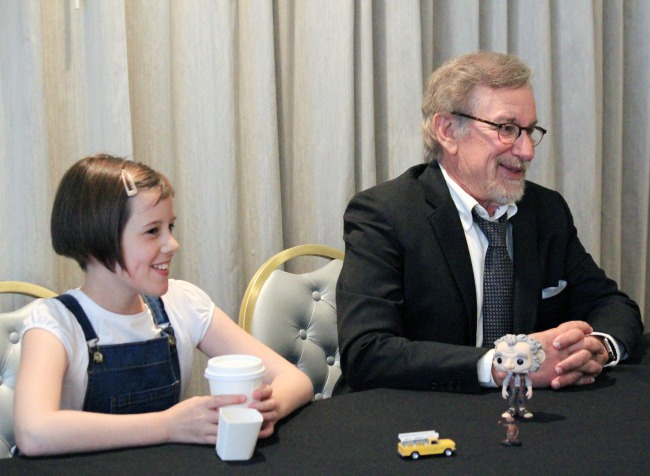 Ruby and Steven were asked what their favorite parts of the film or the process were. Ruby said her favorite part was coming to set each day and being with everyone. She loved getting to act everyday, which is what she has always wanted to do. Steven’s answer for his favorite part was beautiful and touched me, so here’s his quote:

I think every time there was a scene where they spoke to each other and every time there was a scene where they were in conversation with each other where, where Sophie’s courage was growing and her empathy for BFG’s problems with his older brothers and the horrible things they were doing all over the world that Sophie said we must find a way to stop the other giants. Any time they were engaged in any kind of conversation and even disagreement or even semantics about BFG being so ashamed of his, of his use of the Wigglish language. He speaks terrible Wigglish he said and Sophie says, no, I think you speak beautifully. He says really? That’s the greatest thing anybody’s ever said to me in my entire life. Any time they were in kind of conversation, all those scenes were my favorite scenes.

Lastly, the one thing Steven wants everyone to get out of this movie is to realize how important it is to give and receive hugs. 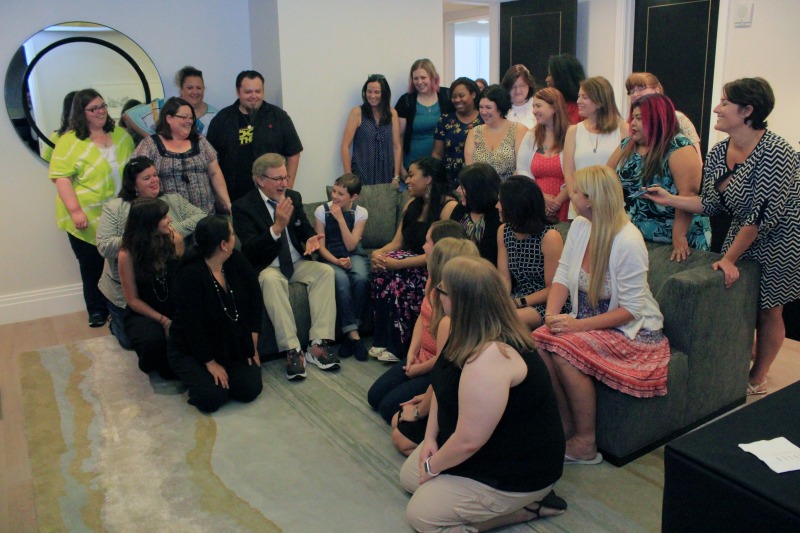 At the end of the interview we gathered in another room to take a group picture. This is when things got incredibly awesome. We had prearranged where we were going to sit during the pictures. I was going to be kneeling on the floor in front, very close to him. This put me literally at the feet of Steven Spielberg. When he sat down he started to talk to us. He said that he loved the idea of meeting with “Mommy Bloggers.” He recalled a time as a child waking up in the morning and seeing coffee cups lined up on the table. He knew that meant his Mom’s friends were coming over. He laughed comparing it to our group “Mommy Bloggers” group. It was a magical moment. Since I was so close to him we kept making eye contact like he was having the conversation with just me. Notice in the picture he has captured all of our attention. We then took several pictures, he thanked us and we thanked him. Once he left the room and I returned to my seat I balled. I think his kindness, sincerity and interest in us really touched me and I reacted stronger than I would have ever thought. That moment will be one of my “core memories” (shout out to “Inside Out”).